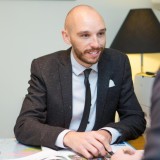 ICEHOTEL opened in 1989 and as well as being a world class hotel it is also an art exhibition with ever-changing art made out of ice and snow. Each winter season the ICEHOTEL is created in a new concept, completely made out of natural ice from Torne River, one of Sweden’s national rivers and last untouched waters. When the winter season’s ICEHOTEL has melted back into the river in the spring, a part of the hotel remains; a place where visitors can experience the ice and snow year-round.

Call our ICEHOTEL specialists on the number above to plan and book the perfect trip to Sweden.

Each year the hotel chooses artists to design the individual ART SUITE rooms and public areas of the hotel. The hotel has just announced the six artists and designers who will all have a special place in the hotel’s heart and history and have been invited to participate in the celebration of the 30th anniversary of Icehotel. The selected artists will create the Main Hall, the Ceremony Hall and the Icehotel 365’s Icebar.

When the first snow reaches the ICEHOTEl around mid-November, the selected artists will gather to create the art exhibition of snow, ice and light that will become Icehotel #30.

The artists’ designs for the ART SUITES, which opens on 13th of December, will be released in September.

Jens Thoms Ivarsson, in the picture, and Mats Nilsson started their design studio Thoms & Nilsson in 2002 and together they have done numerous projects all over the world.

Designer, artist and drummer Jens Thoms Ivarsson has previously worked as Creative Director for Icehotel (2012-2016). He is currently Creative Director for the project Rain Gothenburg, with the vision to turn Gothenburg into the best city in the world when it rains. Stonemason and craftsman Mats Nilsson has had a central role at Icehotel for several years, both as support leader and as developer of the ice-production machinery. He was also the project leader for the snow-construction in Ichotel 365.

Since 2003 Jens and Mats have done more than 60 projects all around the globe for ICEHOTEL, 33 of these were Icebar. This year will be their 18th year at Icehotel:

“We are very happy and excited to be back to create the main hall. As it’s the first impression the guest will get, it’s an important one. We always want to make people interact with our work, and hopefully they will get a smile on their face too,” they say.

Kauppi & Kauppi is a studio and designer duo (Nina and Johan Kauppi) with roots in the very south and north of Sweden. In 2016 they established the shared design studio Kauppi & Kauppi in Sweden, after living many years in New York and Frankfurt.

Their relationship with Icehotel started 16 years ago and they have through the years created several art suites for the hotel.  The designer duo feel honored to be invited to design the Ceremony Hall and look forward to being part of Icehotel #30. “It will be pure joy to work and to celebrate the anniversary of Icehotel together with skilled artist and designer teams from all corners of the world”, Johan Kauppi says.

Luc Voisin, to the left, is a french landscape and interior designer. Mathieu Brison, to the right, has many facets: urban planning, architecture, design, scenography and artistic direction of festive events. Together, they explore the limitless possibilities given by mixing space design and new technologies.

Voisin´s and Brison´s first experience with snow and ice was in 2012.

”It was a life changing experience! Together we have designed several art suites and luxury suites, and each design has been a way to challenge our creativity and discover the technical boundaries of these amazing materials,” they say.

Call our ICEHOTEL specialists on the number above to plan and book the perfect trip to Sweden.